Parents all around the world are tearing open their children’s favorite sippy cup, and finding deadly black mold caked on the inside. They are mad as hell and taking to social media to voice their frustration with sippy cup manufacturers such as Tommee Tippee Sippee Cups who just this week recalled 3 million cups because of the risk of mold that could cause sickness. 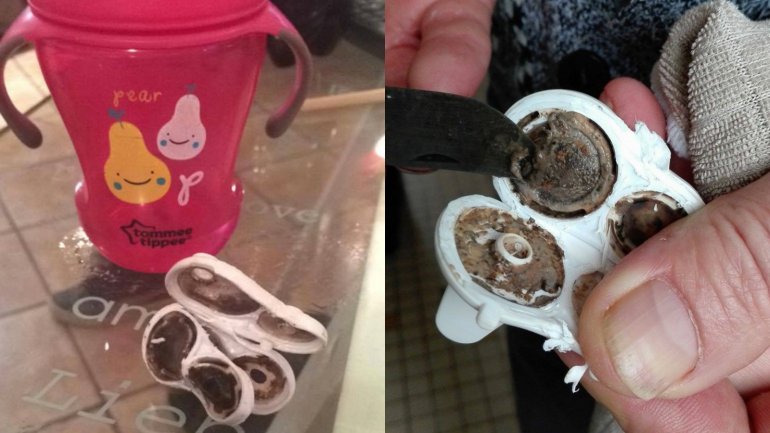 The company who makes the cups, Mayborn USA has been inundated with calls and complaints from concerned parents since this problem became known back in February when Amanda Townshend‎ had posted photos (shown above) of her child’s moldy cup on the Tommee Tippee North America Facebook page.

Townshend had said, “Just found CHUNKS of mold in our sippy cups! Very disgusting and this isn’t even a sippy that’s been used a lot. We have a few other that have been used more that probably look worse then this! TAKE YOUR PRODUCTS OFF THE SHELVES. YOU’RE MAKING KIDS SICK!!”

Laura Greene, a mom from Forsyth, Missouri, found mold in her 19-month-old daughter’s cup after seeing several other parents posting about it on Facebook. Greene said she has been using the cups for about a year, putting cold milk and water in them for her daughter.”We spent 15 minutes sawing the spout open. Once we got inside, it was covered in black mold.”Greene said she always washed the cup immediately after each use. She washed the cup by hand with hot soapy water or in the dishwasher with all pieces removed and washed separately.(CNN)

Greene was upset to discover the mold in her daughter’s cup and posted to the Tomee Tippee North America Facebook page with photos.

“Every time she drank from one of the cups she told me, �?mommy yucky,’ [and] I didn’t really understand because she typically drinks the same few drinks, and I hadn’t changed anything in that sense,” she said. “I washed the cups and valves after every use, and every couple days I would boil the lids and valves to try and ensure they would be as clean and germ free as possible.”

However, despite the complaints by thousands of parents who also found mold in their children’s cups, it took the company several months to finally issue a recall on their moldy, and dangerous cups.

A mother had commented after the recall on the Tommee Tippee Facebook page: “This has been an issue months ago, and you guys just now issue a “voluntary recall.” I threw the valve away and kept the bottle. I saw the post about this mold stuff growing inside of the valve months ago and for Tommee Tippee to just handle it now is disappointing.”

Parents need to be aware that the Tommmy Tippee cups are not the only sippy cups that parents have found black mold hiding inside. Parents have been finding mold in all different brands and types of sippy cups such as Playtex, Contigo, and Munchkin Miracle 360 Toddler Sippy Cups for many years.

Dr. Claire McCarthy, a pediatrician at Boston Children’s Hospital and assistant professor of pediatrics at Harvard Medical School, told Healthline via email that mold growing inside a sippy cup is likely quite common.

“Almost by definition, because the way sippy cups work, fluids can get trapped in whatever is being used as the mechanism — and when fluids get trapped and left there, mold can grow,” McCarthy said.