Why using Ozone is not safe for mold removal and remediation 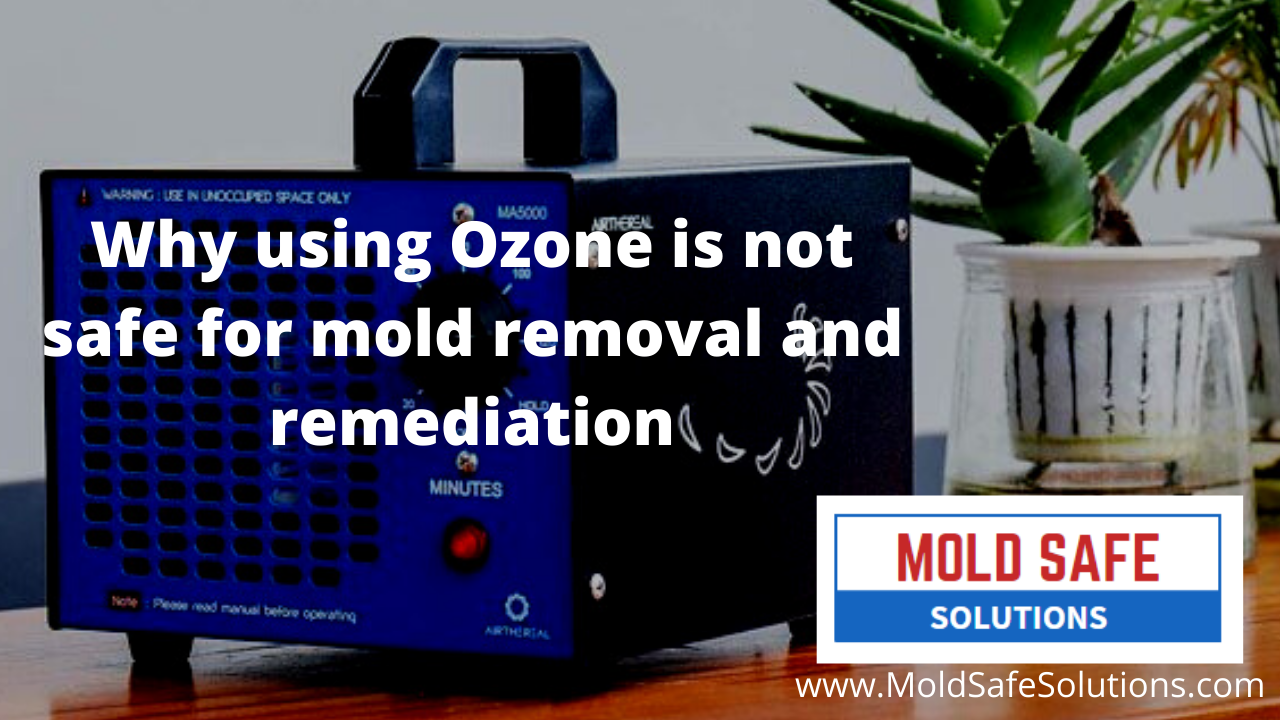 When you search online or ask people in the various Facebook groups for the best mold removal products, you will get different answers depending on the person and their knowledge of the industry. One of the most common and possibly one of the most dangerous recommendations that I have come across over the years is using an ozone machine (generator) to kill mold and purify the air.

These ozone generators are often marketed as “indoor air purifiers or air cleaners” that emit ozone to kill airborne pathogens like mold growth and or eliminate odors and chemicals. However, there is very little to no science backing these claims and there is not one certification and or licensing agency that recommends that it be used for remediation. Also, I have found some studies have proven they are not only dangerous but that they are also ineffective at removing mold.

For example, a study titled, “Evaluation of Antifungal Effect of Gaseous Ozone in a Meat Processing Plant,” found that after the treatment gaseous ozone, it did not show any inhibitory activity against mold strains, as optimum growth during all the trials was observed.” (1) In another study of using an ozone generator to remove mold, the researchers discovered that “over a six-hour period in an average size room the device did not generate sufficient ozone to suppress bacterial and fungal growth.” (2)

Some people who have been told to buy an ozone generator in an online Facebook group or blog may not be aware that ozone may not work on their mold problem and even worse, potential exposure to the fumes irritates and inflames the lining of the respiratory system which can cause permanent lung damage. It can also worsen asthma symptoms and may contribute to the development of asthma.

It can be so harmful that the Environmental Protection Agency (EPA) has listed ozone as one of six of the most dangerous air pollutants under the Clean Air Act which sets the standards for outdoor air quality to protect public health. The Mississippi State Department of Health has issued warnings to its citizens that ozone is not effective in controlling molds and fungi, even at high concentrations far above safe health levels. Also, ozone may damage materials in the home. For these reasons, the Mississippi State Department of Health strongly recommends that you do not use an ozone air cleaner in any occupied residential space. (3)

With that said, some people online swear by them and say that if they are used correctly, these machines are effective at removing mold safely but I disagree. We all have the right to choose what is the best and safest method for the remediation of our homes and vehicles. I just recommend that you gather as much information about a product or method before you use it because it can be dangerous and even deadly.

The facts are that ozone has been known for decades to be very dangerous to human and pet health so it is not safe for cleaning, purifying the air, and or in mold remediation. There are no federal agencies that have approved the use of ozone generators in building for human use, and the California Air Resources Board (CARB) has very stringent regulations for air filters sold in the state to ensure that they do not produce harmful levels of ozone.

For example, did you know that ozone is the main component of smog and naturally contains Volatile organic compounds (VOC’s) which are the result of human-made chemicals such as paints, pharmaceuticals, and refrigerants?

According to the California Air Resources Board, “not only are ozone generators ineffective at cleaning indoor air, but inhaling ozone poses serious health risks for humans and animals. This fact sheet discusses these health risks and provides effective, alternative solutions to address indoor air quality problems.”

“Manufacturers sometimes inappropriately refer to ozone as “activated oxygen,” “super oxygenated” or “energized oxygen,” which implies that ozone is a healthy kind of oxygen. Because ozone reacts with some other molecules, manufacturers claim that the ozone produced by these devices can purify the air and remove airborne particles, chemicals, mold, viruses, bacteria, and odors. However, ozone is only partially effective at cleaning the air when it is used at extremely high, unsafe levels that pose a serious health risk. (4)

“Scientists have studied the effects of ozone on health for decades. Hundreds of studies have confirmed that ozone harms people at levels currently found in the United States. In the last decade, we have learned that it can also be deadly, said the American Lung Association. (5)

These are the things that ozone machine manufacturers and marketers do not tell you!

The Environmental Protection Agency (EPA) says, “When inhaled, ozone can damage the lungs. Relatively low amounts can cause chest pain, coughing, shortness of breath and throat irritation. Ozone may also worsen chronic respiratory diseases such as asthma and compromise the ability of the body to fight respiratory infections.” (6)

The finding from the EPA has concluded that Ozone Pollution is a serious pollution and health threat that can lead to an early death. The EPA stated;

When searching for solutions to your mold problems, it is always best to use safer methods that have been proven to be effective at mold and or odor removal. The facts are is that there is no scientific evidence that ozone generators work for remediation, unless when they are used at extremely high levels of ozone.

The facts are that there there are other products that have been proven to be much safer and more efficient at mold removal such as a high concentration hydrogen peroxide and a good HEPA air purifier which will trap 99.7% of indoor air pollutants and meet the EPA standards for efficacy rather than trying to create a chemical reaction.